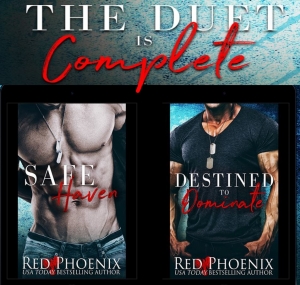 What’s better than a new release – when it completes a duet!
1-Click Safe Haven & Destined to Dominate now and get ready for a love story you can’t put down!

Start reading Safe Haven now. You’re going to LOVE this story. So many feels. SO MANY FEELS!

The dark, sexy world Varick Roth is born into is ruthless and harsh – vampires are lethal creatures. He resists the violent culture, but his is a lonely existence until Aleshia enters the darkness. Theirs is a tumultuous love affair rife with pain, revenge, & passionate sex. In desperation, they share their blood to escape hell, transforming Varick into a new creation. One with terrible and colossal powers…

The passionate vampire has vengeance on his mind, but Aleshia is the chink in his armor and may end up his undoing.

By the Light of the Scottish Moon – Unrated

Two lost souls, the Moon and a death wish…

Bryn, the leader of his wolf pack, is so lost in his own pain he cannot see beyond it. Freya is dying and has come home to Scotland to say goodbye. A chance encounter on the moors of Scotland brings these two lost souls together. Freya’s fate lies in Bryn’s loving hands, but he knows that to save her he must kill her.

The Keeper of the Wolf Clan

Keeper of the Wolves #1

Delve into the lives and secrets of the Daric werewolf clan…

Layla grew up the privileged daughter of the Keeper. The Keeper is in charge ofpreserving peace among the four Alphas, preventing civil war (but the Ritual is shrouded in secrecy). Just before the full moon her mother dies, leaving Layla to perform the mysterious Bonding Ritual.

“What happens to you tonight will be your undoing.” ~Valen

Valen, her enemy since she was a pup, will be her partner for the Bonding, buthe underestimates how strong she is – everybody does. Layla faces the four Alphas determined to save her people and honor her mother’s memory as the new Keeper of their clan.

Purchase from these sites: AMAZON
This popular Blissful novelette is now a full-length novel, Blissfully Undone by Red Phoenix.

The Keeper Unites the Alphas

Keeper of the Wolves #3

A white flower with an arrow through its center—Bram’s message to Layla of the West, the respected Keeper of Wolves.

So begins the next season of Layla’s journey. The four Alphas are determined to protect their beloved Keeper, but the dark leader of the rival clan will stop at nothing to claim Layla once she’s captured. Can her four devoted Alphas rescue Layla from the clutches of the diabolical leader, and protect the precious gift she holds within?

(18+) For Mature Audiences Only